This is a spin-off from these Spider-Man movies: Spectacular Spider-Man (Movie)

After Spider-Man "destroyed" the Venom Symbiote, Edward Brock went to working as the cook in a local pub ran by the mob-boss, Mr. Negative. Meanwhile, Kletus Kassidy has been searching for the Carnage Symbiote. He finds it oozing from a sewer-pipe, and becomes Carnage once more. Later that night, Mac Gargan, The Scorpion, is attacked by the Venom Symbiote, and transformed into the new Venom. The Symbiote urges him to attack Edward Brock at Mr. Negative's pub, when a White Symbiote crash-lands in the back of the pub. It crawls inside and attacks Brock, tranforming him into Anti-Venom! 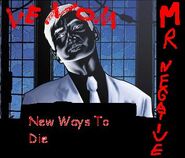